photos from the New Year’s Day concerts in Brno

On the road for October!

After 4 performances in Scotland and 1 in Berkhamstead with John York, Raphael Wallfisch hits the road again for concerts with Trio Shaham Erez Wallfisch – October is a busy month!

Elizabeth at the Barbican 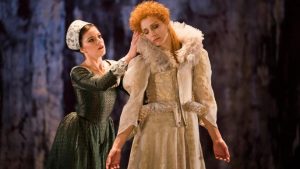 Dance review: Elizabeth at the Barbican

★★★★☆She arrives on stage, dolled up in her regal finery, her red hair fabulously coiffed, every inch of her dressed to rule. Suddenly the layers are stripped away and Elizabeth I is no longer a monarch but a feeble flesh-and-blood woman. The year is 1603, the year of her death. Will Tuckett and Alasdair Middleton’s dance-theatre collaboration then takes us back to the beginning of her reign, in 1558, in a show that explores Elizabeth’s relationships with the men in her life.

The Virgin Queen didn’t have much luck with the opposite sex, but that wasn’t from a lack of trying. Her list of “favourites” included Robert Dudley (Earl of Leicester), Sir Walter Raleigh and Robert Devereux (Earl of Essex), but she was betrayed by them all. Even the Duc d’Anjou, the French toy boy she was supposed to marry, abandoned her by dying prematurely.

Middleton draws on poems, songs and letters of the time (some of them written by Elizabeth) to flesh out the story. Tuckett’s articulate pointe shoe choreography is classically vibrant with a tinge of period flavours, a sheen of regal authority and bursts of acute emotional pain. Martin Yates’s score for solo cello (played wonderfully by Raphael Wallfisch) draws on the music of Elizabethan composers such as John Dowland and Thomas Tallis. A trio of actresses, led by the marvellous Samantha Bond, deliver the words; the baritone Julien Van Mellaerts brings the songs to life with warmth and wit.

Zenaida Yanowsky, the former Royal Ballet principal (this revival is presented by the Royal Ballet), inhabits the many faces of the Tudor queen, from the coquettish but headstrong young woman who loved to sing and dance to the embittered old woman ravaged by time. Yanowsky is radiant throughout the 90 minutes; passionate, tempestuous, melancholic and majestic. A statuesque presence on stage, she looks gorgeous in a succession of beautiful frocks designed by Fay Fullerton.

Yanowsky is well matched by her brother Yury, who brings humour and pathos to the proceedings as the feisty peacock Leicester, the foolish Duc d’Anjou, the rogueish and randy Raleigh and the treacherous Essex.

Wigmore Hall invite Holocaust survivor and cellist Anita Lasker-Wallfisch to share her powerful message in a special concert on 8 July.

Marking the 73rd anniversary of the liberation of Auschwitz, Anita Lasker-Wallfisch will be joined on-stage by her son, the acclaimed cellist, Raphael Wallfisch and pianist John York. 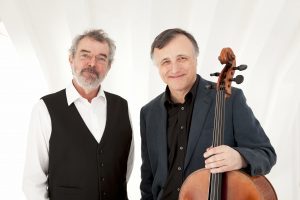 It’s a staggering list, but here’s an update from Raphael Wallfisch on his latest recording schedule…

Next week I will be at Nimbus completing no less than 3 CDs; the Martinu cello and piano works, the 5 cello sonatas by Brahms, and the Weigl cello works cd for CPO.  The end of April sees the release by CPO of the 2nd in the Series, “Voices in the Wilderness” with the World Premiere of the Reizenstein Concerto and the Goldschmidt Concerto with the Berlin Konzerthaus Orchestra.  Also in April, Trio Shaham Erez Wallfisch records Beethoven Archduke Trio following in May with Beethoven Triple Concerto along with Orchestra of the Swan.  In June I will be in Kristiansand recording the 3 concertante works of Vainberg for CPO, and in October I will be with BBC NOW recording concerti by Ben Haim, Bloch and Korngold.

…captivating the audience with a full and beautiful piano sound

Last week saw Raphael Wallfisch’s debut as a Player/Director with Sudwestdeutschen Kammerorchester in Pforzheim.  After such high praise, and a thoroughly enjoyable experience for all concerned, Raphael Wallfisch looks set to continue this exciting new development to his, already, rich career.  Watch this space!

On the occasion of Anita Lasker-Wallfisch’s speech in the German parliament, her son Raphael Wallfisch, performed ‘Prayer’, “From Jewish Life” by the composer Ernest Bloch – view this haunting performance, accompanied by John York, below.

One of the best on record…says Gramophone

….the Shaham Erez Wallfisch’s performance of Dvořák’s DumkyTrio is an utter delight – one of the best on record, in fact, which is saying a lot. Throughout, they have fun with the music and make the most of its soulfulness while always maintaining a tight rhythmic and structural grip. Listen to how they pounce on the down-beats of the first movement’s Allegro, allowing them to spring joyously from phrase to phrase. The dotted rhythms in the second dumka have an articulate expressivity that’s almost like speech, while the third deftly balances earthiness and delicacy. And in the finale, there’s light-hearted ferocity that, heard in concert, would surely bring down the house. 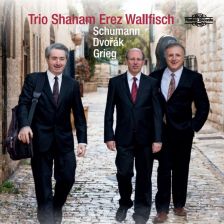